Travel Around the UK by Train

Travel Around the UK by Train

If you have free time, slow down and relax, traveling by train is one of the best ways. Britain’s most breathtaking scenery can be admired from the train window, and you don’t have to spend a lot of money for an epic journey. You can buy the cheapest train tickets at trainpal.

Traveling by train is a beautiful and relaxing way to discover Britain, adding a real sense of adventure to your trip. The railway network covers the entire country and serves more than 2,500 stations. The system is efficient and reliable: you can leave London and reach Scotland in the shortest 4 hours.

Since London has 7 main terminals, most of the lines radiate outward from London, so there may be some changes when travel around the UK by train.

Train tickets are worth buying at trainpal because they will provide tourists with unlimited journeys and discounts, giving you the freedom to go at your own pace.

Train travelling across the Highlands in Scotland

How to buy train tickets

You can buy train tickets online through our ticket purchase page. First-class fares are about one-third more expensive than standard fares. Sometimes buying a two-way ticket is cheaper than buying two one-way tickets.

Plan enough time to buy your train ticket in advance before travelling, and check for special offers or reduced prices at any time. Advance tickets are usually cheaper than those bought on the day, but may limit your ability to change or cancel your journey. You always have to try to click through the page more. We will mark you the cheapest train ticket on the day of your trip, saving yourself a lot of money, which you can spend on the travel of the destination.

Two main reasons to travel in the UK by train

British driving on the left, the road is narrow, the speed is fast, and the requirements for the driver are very high. Especially when crossing roundabouts and intersections, British drivers are very fastidious about the road priorities. The driver with the road priority does not slow down at the intersection. They will think that the other driver will let them pass first. In fact, this is indeed the case. As long as the British drivers don’t have the road priority, they will not snatch the road, and they will stop obediently to let the other driver go first. In this new environment, domestic drivers are unaccustomed to driving on the left. Coupled with unfamiliarity with various road priorities, they often react slowly on the road and are prone to car accidents. The picture below is the famous roundabout in the UK. Most people are confused directly! 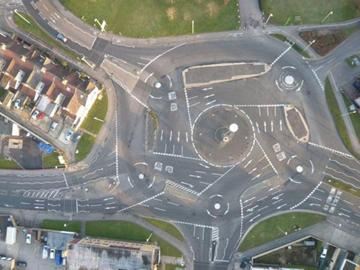 The train system in the United Kingdom is very developed. This is different from the United States. Basically, cities at all levels have trains. Take London as an example. It has been counted on Google maps. There are dozens of train stations of various sizes in the London area alone. So when traveling between different cities in the UK, trains can undoubtedly be your first choice. 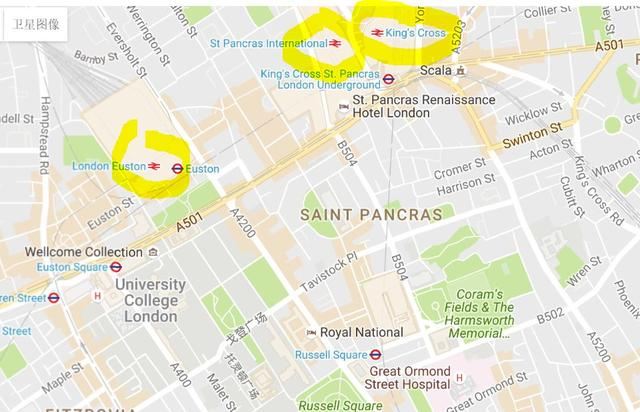 As shown above, there are three railway stations in Euston, St Pancas and King's Cross (the famous Harry Potter 9 and three quarters are here) just around the London University campus.

Tips on travel by train

The fastest and most comfortable trains in Britain are on the main line. It is always wise to reserve a seat in advance, especially if you want to travel during peak hours, such as Friday night. Mainline trains have dining cars and air conditioning, and are very fast - for example, it takes only 4 hours and 20 minutes from London to Edinburgh, the capital of Scotland, or 2 hours from London Paddington to Cardiff, the capital of Wales.

The yellow line above the train window indicates the first-class compartment. Note that even if the train is full, you cannot sit in first class without paying the full ticket.

Normally, buses will post eye-catching notices in the city center and major attractions, and buses will usually stop outside. Trains on Sundays and public holidays may be slower than usual and less frequent.

Be inspired for your next train journey

We picked some of the best places in the UK for you to explore by train. Check out our tour guide itinerary, find an inspiration, and see things you can do when you reach your destination.