Plan to Visit 10 National Parks in England by Train

Plan to Visit 10 National Parks in England by Train

After knowing the national parks of Wales and Scotland, if you are also interested in other national parks and want to arrange a train trip in the UK, keep reading. Or go directly to trainpal to order train tickets.

How to get to The Broads National Park by train

More well known as the Norfolk Broads, this national park has many rare features. The first is that its main gateway city of Norwich is located right on its edges. Second, it was actually man made by peat diggers over the centuries. Third, it has unique wildlife in its vast wetlands, from bitterns to butterflies, and also traditional local wherry boats to traverse them. Take a mainline train to Norwich and then a local one to Hoveton and Wroxham. Great Yarmouth and Lowestoft are also popular with those who want to explore by boat or combine broads with beach.

How to get to The Dartmoor National Park by train

If you plan to take the train to Dartmoor, Exeter and Plymouth are the two stations you should go to. Both stations are located on the main line of southwest England, connecting Bristol and London. From towering granite and rugged marshes to tree-lined trails and bustling market towns, Dartmoor National Park in southern Devon is a contrasting place, with a variety of activities for every visitor. Walking, climbing, biking, photography, mansion, cream tea-no matter what your hobby, you can be satisfied here.

How to get to The Exmoor National Park by train

The best-connected station for Exmoor National Park is Taunton, to the east of the park on the mainline through the South West of England with regular connections to Bristol, London, Birmingham, and the North. From Cornwall and Devon, head for Tiverton Parkway or change at Exeter for the Tarka Line that runs up to Barnstaple. Exmoor National Park extends for 267 square miles along the north coast of Somerset and down into Devon, famous for its incredible landscapes ripe for explorers, including vast swathes of open moorland – home to the iconic Exmoor ponies - tranquil ancient wooded valleys and the highest cliffs in England. Exmoor is a great place to pull on your walking boots and head off for a hike or a short stroll – whatever your pace is, there's always a path for you.

How to get to the Lake District National Park by train

The largest national park in the UK is more than 2362 square kilometers. Its lakes, tarns and mountains are a beautiful combination of poetry, art and music. There are a few trains to the Lake District, and the historic Kendall Wool Town is an amazing starting point, although you can also reach its center at Windermere Station too. This historic station is only a skimming stone's throw away from the famous lake's shore. Penrith is the entrance to the Northern Lakes, and Oxenholme is another route on a branch line to the Kendall area.

How to get to the New Forest National Park by train

One of the few national parks with a station at its heart, making it an even more beautiful space. The majority of it is in Hampshire, with a few wonderful Wiltshire bits too. Take a train to Brockenhurst to enter a world of woodland, wild ponies, wisteria-clad houses, woodlarks and warblers. More than a hundred mainline trains take you there every day, to head from track to trails. Because New Forest National Park has hiking and cycling trails a-plenty. Another good New Forest train station is Ashurst New Forest which is on the edges of the park.

How to get to Northumberland National Park by train

The historical Kingdom of Northumbria is one of the crown jewels of the British National Park. The most notable sights include the Hadrian’s Wall, the wild places within the Cheviot Hills or Redesdale and North Tyne Valleys. Newcastle is a gateway city where you can connect to local trains to Wylam, Prudhoe, Stocksfield, Riding Mill, Corbridge, Hexham, Haydon Bridge, Bardon Mill and Haltwhistle to go to the wild places. Even crazier at night, because this national park is part of Europe's largest dark sky reserve. Head to the coast stations in Alnmouth and Berwick-upon-Tweed to explore some of the wildest and most wonderful coasts in the UK.

In the works of the Brontë sisters, the vast open fields are famously captured, although Lewis Carroll and Bram Stoker also liked the coastal areas of the park. The scenery and sea views of this national park are as diverse as its literati. Take the train to York, Middlesbrough or Whitby. In fact, the train between Middlesbrough and Whitby passes through the park in many places, especially between Great Ayton and Butterby. Commondale and Glaisdale are good places for hiking, such as the 8km long Glaisdale Egton bridge trail.

How to get to the Peak District National Park by train

How to get to the South Downs National Park by train

For people living in the southeast of England, this is an invaluable rural refuge. It is one of the best national parks near London, in fact it is also the closest national park to London. The regular train from Waterloo to Victoria takes 60-90 minutes to reach the stations of Winchester and Lewis, which are the entrances to the national park. The name of the park comes from the grassy-topped wave of hills, but there are also ancient woodlands, rivers and white cliffs on the Sussex coast. Winchester and Lewes are the main gateways, with more regional starting points at Amberley in the Arun Valley, Southease in the Ouse Valley or Liss in Hampshire.

How to get to the Yorkshire Dales National Park by train

Cities close to the national park include York, Harrogate, Bradford and Leeds in the south, Lancaster, Preston and Carlisle in the west, and Darlington and Middlesbrough in the northeast. All these cities are closely linked to domestic and international tourism, including buses, railways and aviation. The rugged limestone, striking valleys, waterfall trails and ancient forests are just a few of the natural highlights of this national park. In fact, this is one of the most famous scenic train trips in the UK. One of the favorite places for hikers is Houghton in Ribblesdale, from which you can reach the Three Peaks. 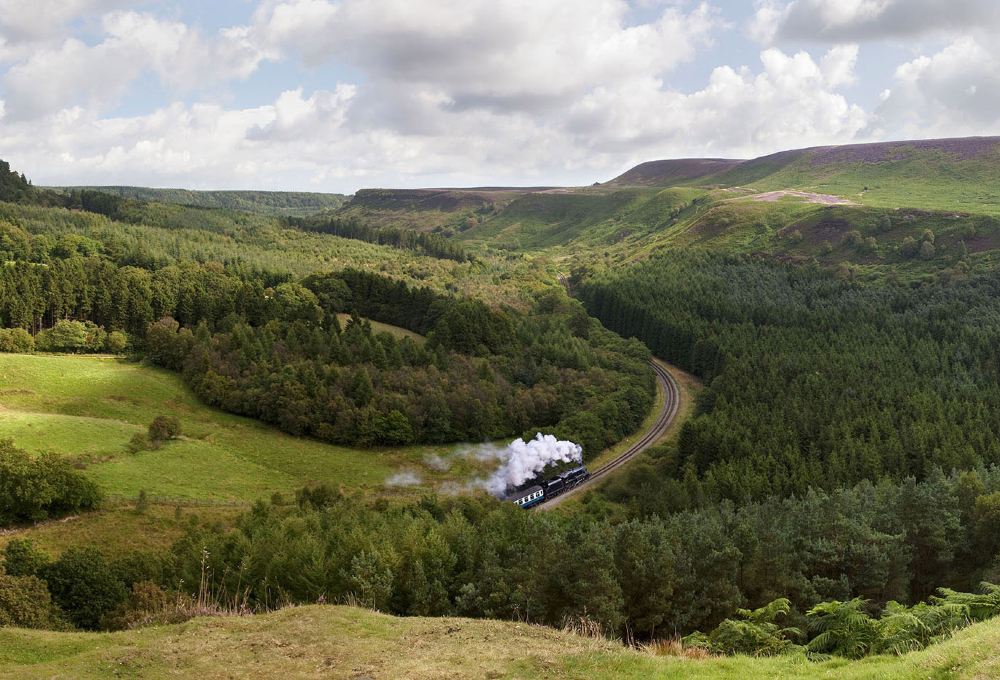 If you are interested in these National Parks and want to arrange a train trip in the UK, please come to trainpal.com to book train tickets right away. Buying the cheapest train tickets in advance can save you a lot of money.