There are many types of transportation for travel, and the most common way to travel in the UK is probably by train. Many people like to travel by train, because the train ticket in Britain is cheap and the railway is convenient. In the UK, there are also many wonderful railway adventures, from the scenic seaside train to crossing the desolate Scottish highlands. The relatively small area of this country means that you can enjoy many things in a short time.

So here are five itineraries to get around Britain by trains. Whether you are looking for history and culture, coast and country scenery, or the coolest city in the UK, there is a perfect British rail travel for you. 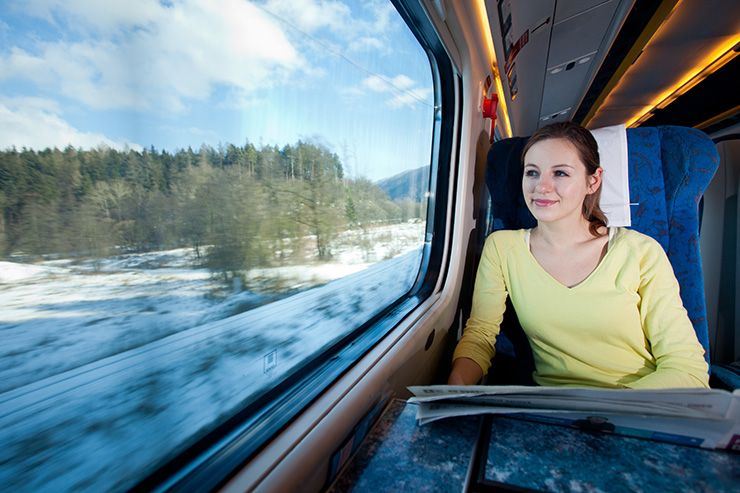 (*Pictures from the Internet）

This train journey takes you through the country, featuring some of England's historic castles, cathedrals and universities. The train departs from London and it takes your first day to explore the city-there are museums and historical buildings everywhere, so choose a few places to visit, such as the Tower of London, Westminster Abbey, Windsor Castle, etc. Then take the early train to Salisbury (1.5 hours) to visit its 13th-century cathedral-visit the tower and see the existing copy of the Magna Carta.

Next, you can take the train to Bath Spa (1 hour). Don't miss the city's famous Roman Baths-enjoy a modern version of the spa at Thermae Bath Spa. Bath also has some beautiful Georgian buildings. Then take a train to Oxford (1 hour 15 minutes), one of the most famous university cities in the UK.

You can take a train to Shakespeare's hometown Stratford-upon-Avon after seeing a variety of handicrafts (1.5 hours) at Oxford's eccentric Pitt Rivers Museum. You can visit his birthplace, the house where his wife and daughter live, and you can also go to the Royal Shakespeare Theatre to watch a play. Then end your journey in York (3 hours and 45 minutes). Wander around the Roman city walls, visit the cathedral, explore the cobblestone alleys, and then go home.

This Scottish railway itinerary takes you all the way to the highlands, passing through rugged coastlines, lakes, moors and castle ruins. Starting from Edinburgh, spend one day exploring the highlights of the city, such as the Castle and the Royal Mile. Then take the train to Glasgow (1 hour 15 minutes), where the focus is on art, design and culture-from street art trails to the striking modern riverside transportation museum.

Next, you can head north into the highlands and head to Fort William (3 hours 45 minutes), which is a riverside town and an adventure sports center near the Nevis Mountains. Take the train across the Glenfinnan Viaduct to Mallaig (1 and a half hours). Or between April and October, you can take the Jacobite steam train, famous for Harry Potter movies. Then get off the train and take the ferry to Skye. Before crossing the bridge to Kyle of Lochalsh, take a bus tour of the island.

Take the train from Kyle of Lochalsh to Inverness (2 hours and 40 minutes). The Kyle train line passes lakes, mountains and deer herds along the way. Explore the castles and cathedrals of Inverness or take a monster discovery tour on Loch Ness. Finally, you can go back to Edinburgh by train (3.5 hours).

This is a British train journey that takes you to southwest of England, along Cornwall's most beautiful coastal and country railways. You will start your journey from London, where you can take the train to Cornwall. Arrive in St Erth early the next morning, transfer to St Ives Bay Line, and pass through the golden beaches of Carbis Bay to St Ives. This art-filled coastal town has some beautiful beaches and promenades.

Next leave St Ives, you will take the train to Falmouth (1.5 hours), change to the coastline at Truro, crossing the countryside to the coast there. Before taking the train back to Truro and along the Atlantic coastline to Newquay (3 hours), you must go to see Falmouth Castle and Maritime Museum. Then visit the seven-mile beach. Then continue your journey to the beautiful fishing port of Luye (2.5 hours).

Be sure to taste Looe's fresh seafood before going to Plymouth (1 hour). Walk along the city's waterfront, visit the aquarium, and climb the lighthouse at Smeaton Tower. Finally, catch the train from Plymouth to Paington (1 hour). Then continue taking the train along the Riviera line for 45 minutes to Exeter.

This train route will take you to the coolest cities in the UK, with many coffee shops, antique shops, street art and bars along the way. Departing from London, head to the most fashionable community in East London-Shoreditch. Taste food from all over the world in the Box Park containers. Then take the train from South London to Brighton (1 hour 15 minutes). Shop on the narrow streets, play arcades on the pier, and then walk along the beach to the neighboring Hove.

Next, take the train across the UK to Bristol (3.5 hours). The city is the center of an independent food, arts and crafts enterprise-taste delicious food at St. Nicholas Market and Wapping Wharf. Next head north to Manchester (4 hours). In bars and clubs in the northern region, it is a good choice to go to a concert or buy vinyl records. Or you can visit the museum and media center in Salford Quays.

It takes only 45 minutes by train from Manchester to Liverpool. Look at the design symbolism at RIBA North and Tate Liverpool. Then head northeast to Leeds (1.5 hours). Visit the city for shops and stunning settings. Finally, take the train to Glasgow (4 hours) to end your journey in the cultural city of Scotland. Learn about its museums and galleries, and try out some of the best restaurants in Finniston.

Wales and the Borders Travel Route by Train

This last British train journey takes you through Wales, from the capital to the coast and mountains. Strating from Cardiff, spend an afternoon exploring its old city in Cardiff Bay and the castle. Then take the train north to Shrewsbury (2 hours), a traditional market town across the border of England, which is the home of Charles Darwin. Visit its castle and buy local gifts.

Then return to Wales and the seaside town of Aberystwyth (2 hours). It has a sandy beach, Victoria Promenade and the oldest pier in Wales. The next stop is the scenic Cambrian coastline, going north through the Snowdonia National Park to Halekh (3 hours). When you cross the estuary along Barmouth, remember to enjoy the amazing scenery outside your window. Explore the hilltop castle of Harlech, or travel to the Italian-style village of Portmeirion (the nearest station is in Minffordd, a 15-minute drive from Harlech).

(*Pictures from the Internet）

Next, go to Porthmadog (25 minutes), you can transfer to the historical steam train of the Ffestiniog railway and go to Blaenau Ffestionig (1 hour 15 minutes) in retro style. Then return to the 21st century and head to Llandudno (1 hour and 15 minutes), another Victorian seaside resort in Wales. From there, cross the border to Chester (1 hour). Explore the Roman ruins of the city, stroll through the city walls, and shop. Then return to Cardiff (3 hours) to end the journey.

If you are interested, book your ticket now at trainpal.com. Trainpal offers the cheapest train routes throughout the UK.